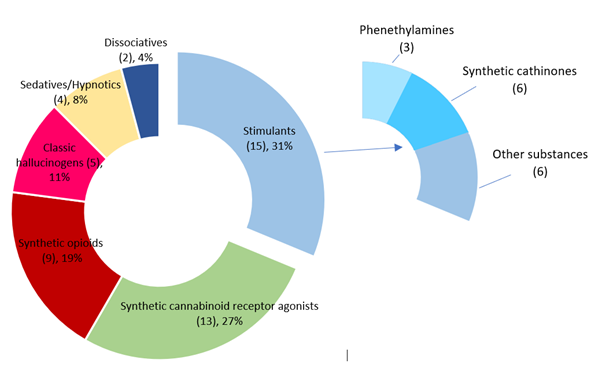 VIENNA, Austria – March 2022:  In 2021, a total of 48 unique new psychoactive substances have been reported for the first time to the UNODC Early Warning Advisory (EWA) on NPS, by 12 countries. Based on preliminary data, stimulants were the largest group of NPS reported for the first time at the global level with 15 substances, followed by synthetic cannabinoid receptor agonists with 13 substances. Stimulants also continue to be the biggest group among all reported NPS to the UNODC EWA, with a total of 381 unique substances reported between 2009 and 2021.

Stimulants exert a stimulatory effect on the central nervous system and influence the levels and action of the important neurotransmitters: dopamine, norepinephrine and serotonin. The action of these neurotransmitters induces a range of excitatory responses in the central nervous system. They are a diverse class of drugs that includes structural groups such as synthetic cathinones, phenethylamines, aminoindanes, derivatives of aminorex and piperazines.

Figure 1: New psychoactive substances reported for the first time at the global level in 2021*, by effect group

Note: *Data collection for 2021 is not completed yet and therefore subject to change. The total number of NPS reported for the first time in 2021 at a global level amounted to 48 substances up to December 2021. 12 reporter countries were included.

Among the 15 stimulants reported for the first time in 2021, synthetic cathinones were the largest structural group with six substances. Two of them, 4-Chloro-3-methylmethcathinone and 4-fluoro-3-methyl-alpha-pyrrolidinohexanophenone, are characterized by substitution with two different moieties in the phenyl ring (a halogen and a methyl group), a modification that has not yet been frequently observed in this group. Among the three phenethylamines, N-pyrrolidino-3,4-dimethoxyamphetamine was observed having an N-pyrrolidine ring in its structure, a modification characteristic for synthetic cathinones. For the first time since 2017, two new derivatives of aminorex (4-bromomethylaminorex and 4-chloromethylaminorex) were reported to the UNODC EWA in 2021. The remaining four substances had diverse structural modifications.

The emergence of new substances poses significant challenges to control efforts and health services. To assist the work of law enforcement, forensic drug testing and toxicology laboratories, UNODC provides analytical information on NPS in the UNODC EWA as well as assistance in the areas of quality assurance, provision of manuals and guidelines, field detection, and training. Moreover, information from the UNODC EWA contributes to identifying the most harmful, persistent and prevalent NPS as an important step towards prioritizing NPS for international review in the framework of the International Drug Control Conventions. 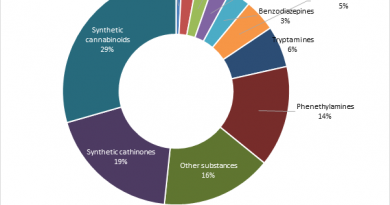 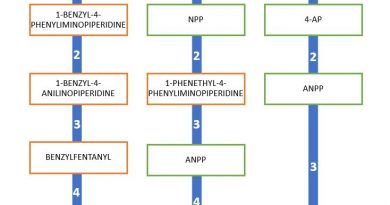